From Revolution to Soviet Empire Tour

Expert tour dedicated to 1917 Russian revolution, led by a Professor of History and Arts

In the early 20th century Russia endured several revolutions waged against the Tsarist autocracy. The old regime fell and gave rise to a new formation, the Soviet Union. All Russian revolutions including the last one in 1917 took place in Saint Petersburg (Petrograd, city name in 1914-1924)

Take this tour and visit the key sites of the revolutionary events that had effect on the course of history of Russia and the entire world.

DAY 1 – Where it took place

City tour with photo stops giving you an overview of the history and geography of St. Petersburg, the UNESCO World Heritage site and one of the world’s most amazing travel destinations. Visit to the cruiser Aurora.

This famous ship is a symbol of the Russian Revolution. Its cannon gave signal for the storming of the Winter Palace on 25 October, 1917 bringing the Bolsheviks to power in a coup that changed world history. Sergei Eisenstein’s immortalized Aurora in his 1928 film “October”. Aurora is also the oldest surviving ship of the Russian Navy, having fought during the Russo-Japanese War of 1904-1905, WWI and WWII defending Leningrad. Now the cruiser is a branch of the Central Naval Museum and tells the Russian naval history of the 20th century.

In the afternoon visit the Palace Square and the Hermitage Museum, the huge architectural complex of five buildings and the largest art gallery in the world.

You’ll enter the Winter Palace (1762) – a gem of Russian baroque and the main residence of the Romanovs. You learn the exiting story of its storming by Bolsheviks in 1917. The tour takes you to see the State rooms and art galleries of the palace, as well as other buildings of the Museum: Small Hermitage, Old Hermitage, New Hermitage and the Hermitage Theatre. Included are works by great masters, such as Leonardo da Vinci, Titian, Rafael, Rembrandt, Van Dyck and others.

The station is famously known for the arrival of Vladimir Lenin by train from Germany on 3 April 1917 to start the October Revolution. The event is commemorated by the Soviet statue of Lenin (making a speech on top of the armed car) dominating the square in front of the station.

Later Lenin had to flee to Finland for safety, to avoid arrest, and returned to this station again on 9 August 1917. Both times he crossed the Russian-Finnish border on the steam locomotive 293. It is now installed as a permanent exhibit at one of the platforms on the station.

In the afternoon drive to Tauride Palace – a seat of the Provisional government  and observe the Smolny Institute, headquarters of the revolution in 1917 and central location of the Bolshevik leaders.

The City tour continues to the Monument to the founder of the KGB Felix Dzerzhinsky and takes you by the exterior of the “Bolshoi House” – a former KGB builing.

Bolshoy House (Bolshoy Dom) became the local headquarters for the Committee for State Security (KGB) when it replaced the NKVD, and remained under KGB usage until the collapse of the Soviet Union in 1991. At present, it is used as a branch of the Federal Security Service of Russia (FSB) and Main Department of the Ministry of Internal Affairs.

The morning programme includes a visit to the Peter and Paul Fortress, former political prison in Russia. You will also visit Peter and Paul Cathedral, a burial ground of the Romanov Imperial dynasty. The last Russian Tsar Nicholas II and his family were buried there in 1998.

Your afternoon tour is to Museum of Political History of Russia

The Museum is located in the former private mansion of Matilda Kshesinskaya, prima ballerina of the Mariinsky Theatre. In 1917 this building briefly became headquarters of the Bolsheviks and Lenin’s office. His memorial apartment is unchanged since Soviet days.

The Museum keeps a number of evidences of Russia’s political life from the late 19th till the early 21st century. They reflect the history of the state system reforming, fates of the most prominent historical figures, processes of development of revolutionary, democratic, social and political movements and parties.

DAY 4 – How they lived: from palaces of aristocracy to apartments of Bolsheviks

Visit Yusupov Palace on the Moika River, home of the noble and wealthy Yusupov family, where Grigory Rasputin was murdered by Felix Yusupov just before the revolution.

Those interested in the biography of Vladimir Lenin will certainly enjoy a visit to the Elizarov Flat Museum. In 1915-1917 it was the home of Lenin’s sister Anna and her husband Mark Elizarov, a revolutionary and later a Soviet politician. In April 1917 Lenin and his wife Nadezhda Krupskaya came to stay with their relatives. Although they lived in the flat for only three months, Lenin wrote about 150 works there.

Another address with links to the revolution is the Alliluyev Flat Museum. Joseph Stalin, who was married to Alliluyev’s youngest daughter Nadezhda, lived there for a time. Among those who visited the flat were Lenin and his wife Krupskaya.

This morning we drive to Kronshtadt Island – a naval base in the Gulf of Finland and a revolutionary sailors’ town. In 1921 Kronshtadt was a site of a famous anti-Bolsheviks rebellion cruelly suppressed by the Soviet government. Visit the newly restored St. Nicholas’s Cathedral.

In the afternoon we cross the Gulf of Finland on a damp and arrive to the Razliv settlement to visit Shalash and Sarai Museums, secret hiding places used by Lenin.

In summer of 1917 Lenin, to escape detection, disguised himself as a haymaker and stayed in sarai (the wooden shed) and in a small shalash (straw cabin) where he worked on his book ‘State and Revolution’. A reconstructed copy of the historic cabin and a pavilion, also called ‘Shalash’, features Lenin related exhibits and temporary exhibitions. The shed was restored to the 100-year anniversary of Lenin and protected with a glass case.

PLEASE NOTE: All visits are subject to change due to days off at Museums 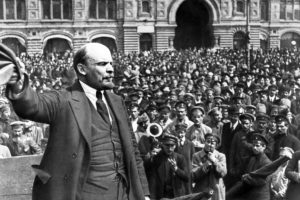 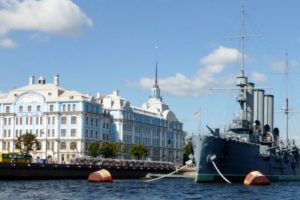 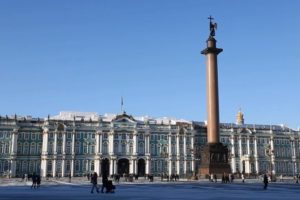 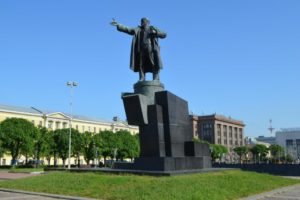 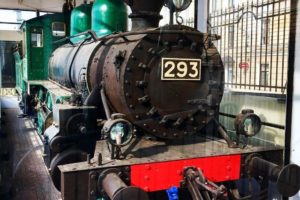 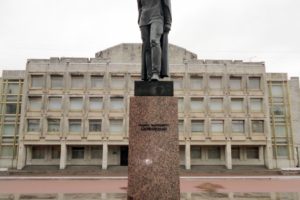 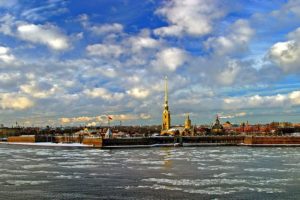