5 nights/6 days out of Moscow

This trip to Golden Ring cities in full depth introduces you to the treasury of Russian history, masterpieces of ancient art, unique monuments, great museums and fascinating landscapes.

08:00 Make sure that your bags are on board and you start driving out of Moscow to Pereslavl Zalessky (145 km – 3 hours with a refreshment stop).

Visit to the renown St. Saviour of Transfiguration Church (1157), one of the earliest to be seen on the Ring.

Drive to Rostov the Great (64 km). On the banks of the lake Nero, this town flourished as a trade and cultural centre from the 9th to 18h centuries.

Lunch in the Rostov Kremlin restaurant

The tour includes a tour of Rostov Kremlin with its enchanting silver and gold cupolas and Enamel Museum celebrating the tradition of miniature painting on enamel.

AM The day stars with the Yaroslavl city-tour. On the western bank of the River Volga, this ancient city retains much of its 18th and 19th century mercantile appearance and layout. Photo-stop at the Church of John the Baptist depicted on the Russian 1000 rouble bill.

Monastery of the Saviour of the Transfiguration

River Volga cruise with lunch served on board

PM Drive to Kostroma (84 km). Kostroma is one of the ancient towns northeast of Moscow. Founded in 1152, Kostroma is mostly known for being the motherland of Romanov family, who lived here before becoming the Russian Tsars.

Visit the legendary Ipatiev Monastery, at one time the wealthiest in the country. The first Romanov Tsar left from here to be crowned in the Moscow Kremlin in 1613. You will also visit the Tsar’s Chambers and the Trinity Cathedral .

Kostroma is situated on a high bank of the Volga River with many historic buildings still intact. During the tour you will observe city’s cozy streets and admire beautiful buildings from the 18th and 19th century. T

AM Leave for Plyos town, now considered one of the most desirable country getaways by wealthy Muscovites. This little town on the banks of the Volga River was made famous by the 19th-century great landscapist Isaac Levitan who found the light and birch strewn landscape irresistible.

City tour on foot. Walk along the river and visit the Museum of Isaac Levitan located in the artist’s former lodging among the fish-smoking shacks.

Lunch served in a restaurant on the riverbank

PM Drive to Suzdal (148 km with a refreshment stop)

Suzdal is a well-known tourist destination that has many remarkable riverside churches and monasteries dating back to the 11th century, some of which are included in UNESCO World Heritage List. Today, Suzdal has the look and feel of a small provincial town or village, with its beautiful landscape and rustic unpaved roads and houses.

AM Leave the Hotel on foot for Museum of Wooden Architecture with its historic samples of vernacular buildings, this outdoor museum gives an insight into rural living in old Russia. Your next visit this morning is to Suzdal Kremlin; within its walls stands the Cathedral of Nativity with its 13th-century white stone reliefs Its ancient doors are rare surviving examples of the technique of fire gilding.

Have lunch in a local restaurant.

PM Drive to Kideksha (5 km), visit the 12th-century Church of Boris and Gleb, first Russian saints, in this village full of harmouny and charm.

Return to Suzdal to explore the St. Euthymius Monastery and attend a short concert of Church bells.

Return to Hotel / or free time in Suzdal

AM Depart for Bogolyubovo (20 km), a small village between Vladimir and Suzdal.

Territory and churches of the Bogolyubovo Convent that stands on the sight of the former Palace of Andrew the Pious (Bogolyubsky), the only building of Medieval Russia that has survived without renovation.

Walk to the Church of Intercession on the river Nerl , dating from the early 12th century that is considered the most harmonious Temple ever built in Russia. Visit the Church and walk back (walking is across meadows 1 km each way)

Lunch will be served in a local restaurant in Vladimir.

PM Explore the town of Vladimir , one of the medieval capitals of Russia and visit three important monuments that are on the UNESCO World Heritage List: the magnificent five-domed Assumption Cathedral , painted by the great medieval iconographers Andrei Rublev and Daniil Chyorny; St. Demetrius Cathedral notable for its noble form, ideal proportions and walls decorated with beautiful stone carvings and more than 600 bas-reliefs; and the Golden Gate – a combination of battle tower, overgate church and triumphal arch, a remarkable monument of Russian fortification architecture.

AM Drive to Alexandrov (137 km) with luggage on board. Alexandrov was a residence of Ivan the Terrible as an alternative capital of Russia.

The tour including the residence territory and the Palace of Ivan the Terrible.

PM Visit to the St. Sergius Monastery – the ancient centre of Russian Orthodoxy with churches and buildings dating from the 15th to the 18th centuries. An exuberant, extensive site, it makes a fitting end to the Golden Ring Tour. 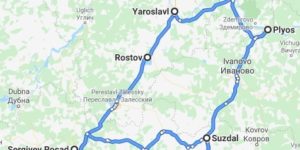 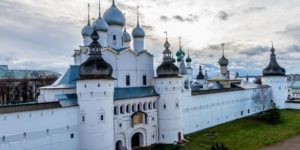 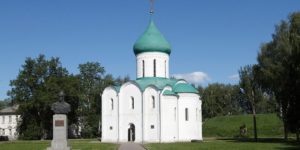 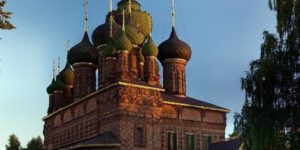 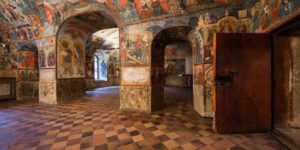 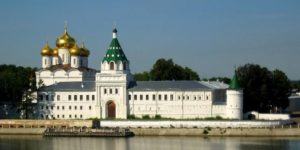 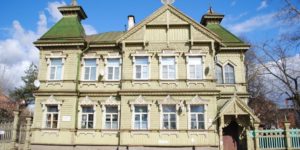