Whole of Georgia: from Kazbegi to Svaneti

If you have 2 weeks available for a breathtaking tour that combines culture, natural beauty, fantastic gastronomical treats, a bit of the extreme and meetings with friendly local people you should plan or join our 2 weeks trip to Georgia. This tour covers all parts of Georgia from the sophisticated Kazbegi mountain area to wild Svaneti on the other side of the country, with the most abiding ancient traditions and outstanding views. You will be deeply touched and impressed by the diversity of culture and nature here, by the incredible hospitality of the local people and the unbelievable quality of food and wine.

Arrive Tbilisi, meet your guide at the airport and transfer to hotel

The Georgian National Gallery was established in 1920. Dimitri Shevardnadze, a well-known Georgian painter, contributed significantly to the development of the gallery.

In the morning enjoy coach city tour of Tbilisi

Visit to Sameba Cathedral and Armenian district
The Holy Trinity Cathedral of Tbilisi (Sameba) is the main cathedral of the Georgian Orthodox Church. Constructed between 1995 and 2004, it is the third tallest Eastern Orthodox cathedral in the world and one of the largest religious buildings in the world by its total area.

PM free & Dinner on own

After breakfast transfer from the hotel to Mtskheta (25 km)

On the way visit to Jvari Monaster
At the top of the mountain above the ancient capital Mtskheta, city of the Iberia Kingdom where the Kura and Aragvi rivers merge, towers the monastery of Jvari – the first monument of Georgia, inscribed on the UNESCO World Heritage list as one of the best masterpieces of medieval Georgian architecture.

Arrival at Mtskheta, the ancient capital of Georgia
The city was founded in the second half of the first millennium This place is one of the most visited places in Georgia.

Visit to the Svetitskhoveli, the main cathedral of the whole Georgia
Many legends are associated with this cathedral, but they all have a common content telling that Svetitskhoveli was built on the site whereby the shirt that Jesus wore during crucifixion was buried. In Georgian its name – ‘Svetitskhoveli’ means ‘life-giving pillar’.

Due to its historical significance and several cultural monuments, Mtskheta was stated as a UNESCO World Heritage Site. As the birthplace of Christianity in Georgia and one of the most vibrant religious centers, Mtskheta was declared as the “Holy City”

After breakfast drive to Kazbegi, mountain region of the country (153 km)

Upon arrival to Stepantsminda and check-in to the hotel have lunch and then enjoy a nice walk in the Kazbegi surroundings.

Then drive through beautiful valleys and woodlands to visit Gargetti Trinity Church located at 2170 m. From there you might be able to observe one of the highest glaciers of the mountains – Mr.Kazbegi (5047 m).

Transfer to the hotel, check in

Dinner at the hotel

After arrival at Telavi have a short city tour and visit Batonis Tsikhe.

Batonis Tsikhe (Master’s Fortress) — residence of Kakheti with the area of 3 ha is located In downtown Telavi. Its territory embraces: the fence (constructed under the king of Kakheti Erekle II in 1753), the Royal Palace (constructed in the 60s of the 17thI century by king Archil; in 1865 the Women’s College of St. Nino opened in this building and the Palace was remade into a three-level building; today – the Telavi museum), the bath (in southern part bathing room and boiler are preserved; walls of the bath were painted), and two churches (Small Church and Church of the Court of Erekle II, built in 1758, the latter being simultaneously a defense facility – it has gun emplacements).

Then drive to Alaverdi, a Georgian Eastern Orthodox monastery (20 km)
While parts of the monastery date back to 6th century, the present day cathedral was built in the 11th century by Kvirike III of Kakheti, replacing an older church of St. George.

Finally drive to the lake Lopota (22 km) or to lake Kvareli (58 km) in Napareuli.

Transfer to a hotel. Dinner

After breakfast head to Bodbe Nunnery of St.Nino (66 km) situated in the town of Sighnaghi, visit the Nunnery
Georgian king Demetre I played an important role in decoration of the monastery. Bodbe monastery was renovated many times by the Georgian kings.

Afterwards enjoy the tour of the town of Sighnaghi (City of love)
Sighnaghi is a small town in the east of Georgia situated on the mountainside in the historical region of Kakheti. It was founded in the 17th century during the reign of King Heraclius II of Georgia, and as locals say, it is the only city in Georgia that has fully preserved fortress walls that are crowned with watchtowers, where one can climb to get the magnificent view of the Alazan valley.

During the tour visit the Sighnaghi museum
Sighnaghi Museum was established in 2007. It is the first high standard museum in Georgia. The Museum exhibits archeology, ethnography and medieval expositions. On display tthere are 16 paintings by Niko Pirosmani.

Lunch and wine tasting at the private vineyard in Sighnaghi

After lunch return to the hotel and free time

Transfer from the hotel to the town of Gori (190 km)

Arrive at Uplistsikhe (God’s Fortress)
Uplitsikhe is an ancient cave city, one of the first cities on the territory of Georgia. Uplistsikhe is carved in a rock located 12 km east of the town of Gori on the left bank of Kura River.

Lunch in a family vineyard in Gori , tasting of Georgian wine and Chacha, with the Georgian traditional dishes.

After lunch visit to the Joseph Stalin Museum in Gori
A historical museum in Georgia devoted to the life of the most famous native of the city, who became the head of the Soviet government and led the Soviet Union from 1925 to 1953. Opened in 1937

Finally drive to Borjomi famous for its mineral water (81 km)

Arrive at Borjomi, check-in to the hotel, dinner

In the morning enjoy tours in Borjomi including

After lunch head to Vardzia(108 km), a rock-hewn complex on the left bank of the river Mtkvari.

The underground halls of the ‘mountain queen’ dug out of the solid rock, Vardzia looks like it was taken directly from the pages of Lord of the Rings . In reality it is a cave-palace-monastery built not by dwarfs, but by Georgians in the Caucasus for their fabled queen Tamara.

After breakfast transfer from the hotel to Akhaltsikhe (48 km)

Arrival at Akhaltsikhe , a small city in southwestern Georgia, part of Samtskhe-Javakheti. The name of the city translates as “new fortress”. Visit Rabath Fortress.

Rabath fortress in the south of Georgia is a fortress of 16 th -17 th centuries on the territory of the historical area of Meskhetia .

After lunch drive towards Kutaisi (175 km)

Stop on the way at the Ubisi village to see the frescos of Ubisi Monastery
Ubisi Monastery located in the village of Ubisi overlooks the river Dzirula and consists of a sinlge-naved church built in the 9 th century and later extended, a tower dated to the 12 th century, some monastic buildings that are now almost destroyed and a wall.

After the visit continue towards Kutaisi

After breakfast city tour of Kutaisi
These days Kutaisi is the capital of Imereti and Georgia’s 2 nd largest city after Tbilisi. Nevertheless originally it had been the capital of the ancient Kingdom of Colchids. Archeological evidence indicates that the city had functioned as the capital of the kingdom as early as the 2 nd millennium BC.

After lunch continue sightseeing in Kutaisi and surroundings

Cathedral of the King of Bagrati ranks among the best monuments of Georgian architecture. Its construction began in the last quarter of the 10 th century and ended in 1003.

Gelati Monastery was founded in 1106 and it is a masterpiece of the Golden Age of medieval Georgia.

Motsameta Monastery is a small, but remarkable Monastery dated back to the 10 th century near Kutaisi. According to a Georgian legend it was built on the same place where 2 Georgian princes David and Konstantin Mkheidze, who refused to accept Islam, were executed by the muslim invaders.

After breakfast drive towards Mestia (221 km)

It’s time to get ready for the most exciting part of the trip – a journey to Svaneti , the region of the highest mountains and glaciers and the most abiding ancient traditions. En route, visit Enguri Dam with the height of 271 meters (the highest dam of this type in the world). The Dam makes a water-storage reservoir in the picturesque gorges of Samegreloand Svaneti mountains.

Picnic lunch on the way to Mestia

At the end of the day arrival at Mestia, check in hotel. Dinner

After breakfast visit Svaneti Museum of History and Ethnography in Mestia
Mestia’s excellent main museum is one of Georgia’s best, with fascinating displays of church treasures, manuscripts, weaponry, jewellery, coins and historical photos. The highlight is the room of wonderful 10th- to 14th-century icons from Svaneti’s churches, fashioned in silver and painted in tempera on wood.

After lunch visit the Laghami Saint George’s church (7th-12th c.c.) and the church of St. George in Nakipari (1130 AD) and Ethnographic Museum in Ushguli.

Ushguli is a community of four villages situated at the head of the Enguri gorge in Svaneti. Ushguli is located at an altitude of 2,100 metres (6,900 ft) and is considered to be the highest populated place in Europe. About 70 families (around 200 people) live in the area, enough to support a small school.

In the evening drive back to Mestia. Dinner

After breakfast head to Martvili Canyon and Abasha Canyon Natural Monuments (170 km). Enjoy its beauty and have a boat trip there. Local lunch is included

Abasha river erosion canyon is located in Samegrelo, Western Georgia and it is 240 meters above sea level. Waters in the Abasha river has amazing deep green color. Originally the Canyon used to be a bath place for the Dadiani Noble family. The Canyon is 2,400 metres (1.5 mi) long, 5 to 7 metres (16 to 23 ft) wide and 50 to 70 metres (160 to 230 ft) deep. In the center of the Canyon there is a waterfall.

Finally drive to Kutaisi, check-in to the hotel

Breakfast at the hotel, check out

Free time until the airport transfer 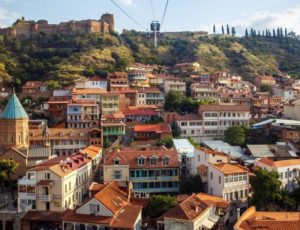 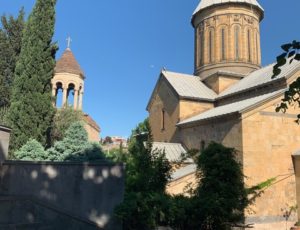 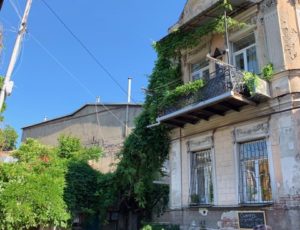 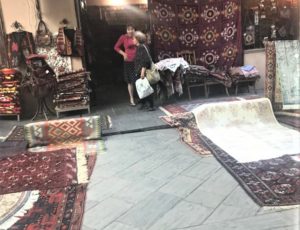 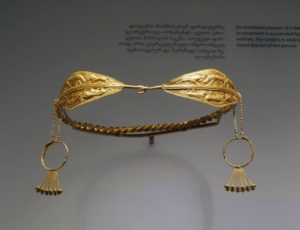 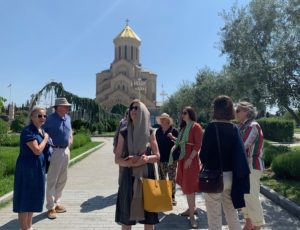